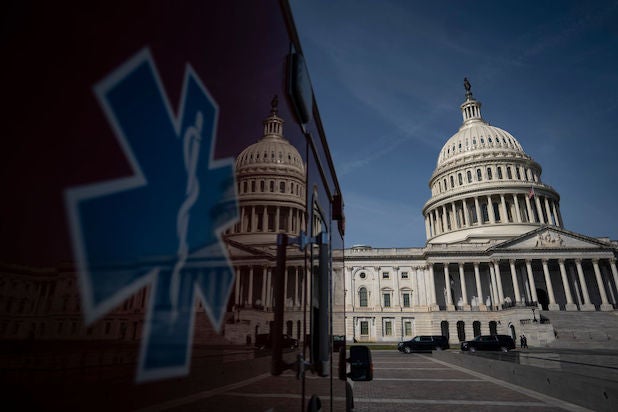 Late on Wednesday, the Senate passed a massive $2.2 trillion economic stimulus package designed to counter the devastating impact of the coronavirus pandemic. Though the entertainment and arts industry may not have gotten everything they wanted from the federal bailout, Hollywood’s most vulnerable workers and businesses will still find some relief through the expansion of unemployment insurance, small business loans, funding for federal arts agencies and direct payments to eligible citizens.

The bill is set to go to the House for a vote on Friday. Some of the main provisions include:

Unlike the airline industry, Hollywood hasn’t exactly been singled out to receive a specific bailout. But many of Hollywood’s bigger businesses could still apply for loans through the $500 billion lending program, while the smaller businesses — which could include many theaters — could request aid from the $350 billion small business loan program to help cover payroll costs. And many of the industry’s arts organizations could receive support through the federal arts agencies — the NEA, the NEH and the IMLS — that were included in the package, though those figures in the millions — not the billions — may run dry quickly.

Also Read: Why Hollywood Shouldn’t Count on Much Relief From $2 Trillion Federal Bailout

Some advocates, particularly in the non-profit arts space, are concerned that the funding still won’t be enough to help hurting arts organizations. Teresa Eyring, the executive director of the nonprofit Theater Communications Group, which supports community theaters across the U.S., told the New York Times that the funding “does not address the severity of the crisis in the not-for-profit arts field.” Other arts group leaders also told the Times they’re concerned that advocating for arts funding from the government — already a difficult task without a pandemic — will only be more difficult during a pandemic, when several other industries and organizations also need aid.

But several of Hollywood’s guilds and lobbying groups said they were pleased with the provisions included in the package that they said would help support their workers and respective businesses.

The National Association of Theatre Owners, which had lobbied Congress for support, said that the loan programs for large and small businesses would allow theaters to pay their fixed costs at a time when they cannot generate revenue.

“With this aid, movie theaters can get through this crisis confident in being able to re-open, knowing their vital, trained workforce is able to weather this pandemic and have jobs waiting for them when it is safe to reopen,” the association said in a statement.

Kate Shindle, the president of the Actors’ Equity Association — a national union that represents professional live theatre actors and stage managers — applauded the expanded unemployment insurance benefits and said that would help furloughed arts professionals and freelancers get the “financial assistance they need.”

Further, Mitch Glazier, the chairman and CEO of the Recording Industry Association of America, said many of these artists who act as sole proprietors could also apply for a loan through the small business loan program, while furloughed musicians would be able to use the expanded unemployment insurance to “pay rent, put food on the table, and care for their children during this public health crisis.”

“We know the power of music will help us get through this crisis, but we also know that economic pain will continue to cut even deeper in the weeks and months ahead,” Glazier said in a statement late on Wednesday. “We look forward to working with the House to get this relief across the finish line as quickly as possible.”

All the Movies Suspended or Delayed Due to Coronavirus Pandemic (Updating)

“Mulan,” “No Time to Die” and “Wonder Woman 1984” are among the growing number of movies halted as COVID-19 spreads

As the coronavirus continues to spread, an increasing number of movies are delaying or suspending production. As the number of impacted movies grows, TheWrap felt it would be most informative to keep a running list.