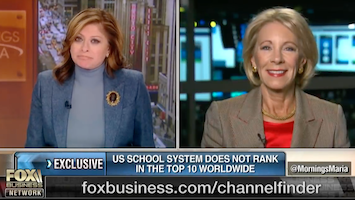 The only thing surprising about email revealing a Fox News producer promised Education Secretary Betsy DeVos an “easy” and “enjoyable” interview with Maria Bartiromo is that the DeVos’ press secretary didn’t know would be a given.

The Hollywood Reporter has the scoop:

On Nov. 21, 2018, the producer wrote: “Ps remember any question she doesn’t feel comfortable answering — she can choose to not answer and pivot the topic — and Maria is seasoned enough to understand and move on. … So no worries on that front. This will be an easy interview and enjoyable.” (The producer is no longer with the company.)

“This should be totally fine,” the press secretary responded. (Media Matters for America, an anti-Fox News advocacy group, would describe the Bartiromo-DeVos chat, which aired on Fox Business Network, as a “softball interview.“)

That exchange was among dozens of email conversations that reflect the symbiotic relationship between the news network and staffers working in the Trump administration. For this story, The Hollywood Reporter reviewed more than 1,000 pages containing emails between Fox employees and aides at the Departments of Homeland Security, Education and Agriculture, obtained via a Freedom of Information Act lawsuit filed by advocacy group Democracy Forward.

Bartiromo is such a Trump lickspittle, she once tactfully reminded Dear Leader he had bombed Syria, not Iraq. More recently, she “distinguished” herself by agreeing with Rep. Devin Nunes that the middle of the coronavirus pandemic is “a great time” to go out to a restaurant. In other words, her sycophancy is as reliable as the sun rising in the east.

This is not the first time Fox was caught staging lapdog interviews with Trump administration officials. The NewsHounds Wayback Machine reminds that just one week after that producer promised an “enjoyable” interview, The Daily Beast reported that Fox was shocked, shocked, I tell you, to learn that Fox & Friends producers had been coordinating questions and topics with Trump’s then-EPA head, Scott Pruitt. The network insisted such behavior “is not standard practice whatsoever.”

Yeah, sure. It turns out that Bartiromo’s softball interview with DeVos aired that very day.

You can watch that interview between Bartiromo and DeVos below, from the November 27, 2018 Fox Business’ Mornings with Maria Bartiromo.

Update: The original video embed wouldn’t work but I found another.